Spring Fest has been a premier community event in the beautiful Columbia Gorge for 40 years, since 1976!  3000+ Attendance. More activities than ever this year! Featuring our Traditional Downtown Parade, Great Entertainment, Games, Competitions, Food and Drink  and non-stop Family Fun for ALL at the White Salmon Spring Festival! 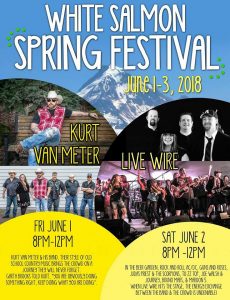 Kurt Van Meter and his band will be playing Friday’s main event. Their old-school style of Country Music brings the crowd on a journey they’ll never forget.

More about Kurt and his band at https://kurtvanmetermusic.com/

Spring Fest has been a premier community event in the beautiful Columbia Gorge for 40 years, since 1976!  3000+ Attendance. More activities than ever this year! Featuring Great Entertainment, Parade, Food and Drink, Games, Competitions, Gear Swap, and non-stop Family Fun for All at the White Salmon Spring Festival!

Harmony of The Gorge

These wonderful singing ladies help with our opening ceremonies and sound great..

Harmony of the Gorge is a group of women singers dedicated to achieving musical excellence and personal growth by providing quality education and opportunities to perform and promote the art form of four-part acappella harmony. We are all members of Sweet Adelines International.

Have fun singing acapella music – while you learn more about the voice, vocal production, song interpretations, and ringing of chords!

Find out more about us at www.harmonyofthegorge.com and “Like” our Facebook page to keep up with us.

1:00-3:00 pm – White Salmon Jazz Band is a 17-piece big band that plays a mix of swing tunes, jazz and contemporary, with many of your old favorites and a few that are sure to become favorites. White Salmon Jazz is dedicated to the performance and promotion of jazz music.

Throughout the years since its inception, the band has always welcomed young people, including players from The Dalles, Hood River Valley, Trout Lake and Columbia High Schools. The band donates to local schools to help pay for instruments, sheet music, and other items to support the music departments. In 2007, they instituted the 1st annual White Salmon Jazz scholarship. Since then they have sent a total of 7 local students to jazz band camp.

This band is living proof that music can last a lifetime, and it is never too late to get out and play and have lots of fun doing it. “Like” their Facebook page to keep in touch.

During the summer of 2015, Dan Boller was looking to put together an ensemble to play at local festival. Having shared musical experiences separately with the rest of the members, he decided to get together for a rehearsal in preparation for the event. After the performance everyone was very excited about the results. The energy,the vibe, the chemistry was obvious…. Big River Blues Band was born.

Mojo Holler weaves threads from mountain ranges to the Mississippi Delta into a tapestry of indie folk rock. Mister Baker channels innate genius through lap steel, slide, and dobro. Missi is a genuine Appalachian ‘Mountain Mama’ whose vocals bring burning intensity to each song. The pair were lauded by South by Southwest founder Louis Black, who called them the ‘godchildren of Mississippi Fred McDowell.” Bass guitarist Eric Shirazi lends an infectious, funky groove to mix that takes the group to a higher plane.

The band formed in 2012 as the duo Missi & Mister Baker. They released their debut album, “Where Black Ravens Flew,” in late 2014, and were tapped to showcase at South By Southwest in 2016. Its founder, Louis Black, said of the pair: “Why Missi had to move to Portland from Austin in order for The Bakers to channel their inner Mississippi Fred McDowell, I do not know. But she did, and they did.” The album combines complex rock guitar and country stylings with rich vocals that hearken Joplin and Fleetwood Mac.

The late Lisa Lepine, a Portland legend in music promotion, said of their mission: “They weave their dark, modern spirituals from shared roots in magic, ‘mericana, and metaphysics. Mister Baker, like Robert Johnson before him, may have made a deal with the devil — channelling an innate genius through lap steel, slide and dobro. Missi’s earthy voice brings burning intensity to each song. Picture them sitting knee-to-knee on a Southern Delta, watching the dark moon rise and singing from their eternal souls.”

Live Wire, the band, formed in 2005, the brainchild of bassist Terry Ryan. Since its inception, the Oregon based band has been on a Rock and Roll Ride! Throughout the years the lineup has changed but there is one thing that has remained the same… The bands love of delivering music accurately and with a passion and energy that is second to none.

Live Wire has previously performed all over the Northwest gaining fans, momentum and recognition as an AC/DC Tribute Band. Currently, although Live Wire still rocks plenty of AC/DC in their sets, they have taken a turn toward a more diverse set of cover tunes ranging from Guns and Roses, Judas Priest and The Scorpions, to ZZ Top, Joe Walsh and Journey. Live Wire’s love of all types of music has led them to cover more modern musical bands such as Bruno Mars, and Maroon 5. Live Wire entertains the masses with a very diverse set of cover tunes that has something for everyone to enjoy.

The band has opened for such national acts as foreigner, night ranger, Pat Travers and has played in venues big and small. One thing is for sure… When Live Wire hits the stage… The energy exchange between the band and the crowd is undeniable!

The hottest players around go at it in the Finals on Sun. June 3rd.  Come out to support your favorite players as they go toe-to-toe in the White Salmon tennis competition of the year.  Who knows, if we get enough talent and support we might make it as a WTA Tour stop.

Spring Fest has been a premier community event in the beautiful Columbia Gorge for 40 years, since 1976!  3000+ Attendance. More activities than ever this year! Featuring Great Entertainment, Parade, Food and Drink, Games, Competitions, Gear Swap, and non-stop Family Fun for All at the White Salmon Spring Festival! 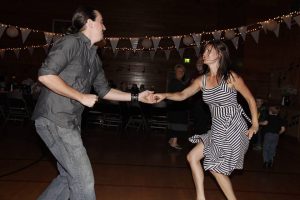 Afro Latin Swing, Hannah & Johnny with friends will be performing from 12:30-1:30pm on Sunday, June 3rd. They will be performing Salsa piece & Lindy Hop, as well as playing some Salsa & Swing music so others in the community can join in on the dancing! 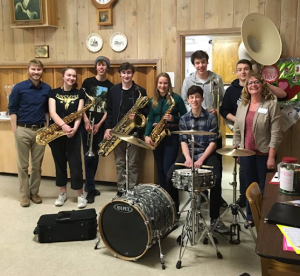 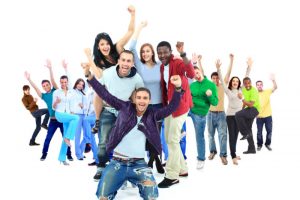 Mike Mutton is on lead guitar/vocals, Ben Tibbets on bass/vocals, Mike DeMello on twelve pedal steel guitar/vocals, and Archie Olsen on drums. All the members have been playing for a long time. Archie and his brother Kenny used to play at The Rhineland Inn back in the 80’s and Mike M. used to play often at The Elkhorn when it was open. Ben Tibbets is
the nephew to the infamous Benny Tibbets from The Dalles area who played at The Shamrock and cut albums and toured the circuit. Ben played music with his uncle Benny Tibbets when Benny played at The Eagles in The Dalles. Mike
DeMello he is very good on The Twelve Pedal Steel and has a very strong voice for delivering the old style classic country. 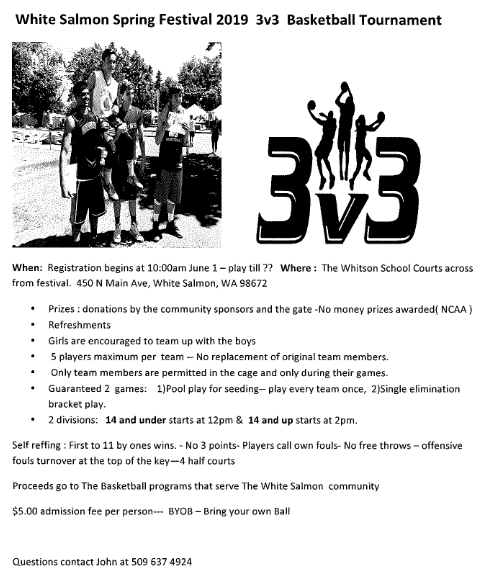 3on3 Basketball pits hotshots and great defense against each other in a fast moving short court competition. There are many benefits to having a tournament, one of the biggest is to give a lot of teenagers something to do.

5 players maximum per team
Girls encouraged to team up with the boys.
$5.00 admission fee per person.

All players by paying admission fee agree to and sign a hold harmless waiver, absolving all the event sponsors, White Salmon Spring Festival, The City of White Salmon or the White Salmon Valley School District for any damages caused by injury in consideration for participation in the tournament. Under 18 must have parents signature agreeing to the terms of the event. All proceeds go to White Salmon Community Ed Basketball. No money prizes awarded, prizes are from donations of the community sponsors.

Join The Parade And Get In On The Fun!

The Springfest Parade starts at Noon from the White Salmon ballpark and goes along Jewett Blvd and Main St. to Rheingarten Park.  It’s great fun to participate in the parade or just to watch.

SpringFest Grand Opening begins when the parade arrives at the park. Let the festivities begin.

Join your friends and neighbors for the 2019 SpringFest Fun Run and Walk on Sunday, June 2 at 9 a.m. in White Salmon. Walk or run your way through quiet streets with awesome views while raising money for community health programs. Proceeds from this year’s event will be donated to the Power of Produce (POP) program at the White Salmon Farmers’ Market. This food assistance program puts hundreds of dollars of fresh produce in the hands of kids and seniors.

Choose the course that’s right for you! The Fun Run and Walk offers two 5K courses and the option to combine them into one beautiful 10K. Plus, the popular Kids 1K is an awesome way for our youngest athletes to get involved.

Join in the Kids 1K at 9:00 a.m. The 5K and 10K will start at 9:30 a.m. All courses start and end at Rheingarten Park. Refreshments will be available along the way and at the finish.

Don’t want to walk or run but still want to join in the fun? The event is currently looking for volunteers to help with aid stations, event set-up and day-of registration. To get involved, please call Debi Budnick at Skyline Hospital, 509-637-2601 or email at debibudnick@skylinehospital.org or visit www.wsfunrun.com 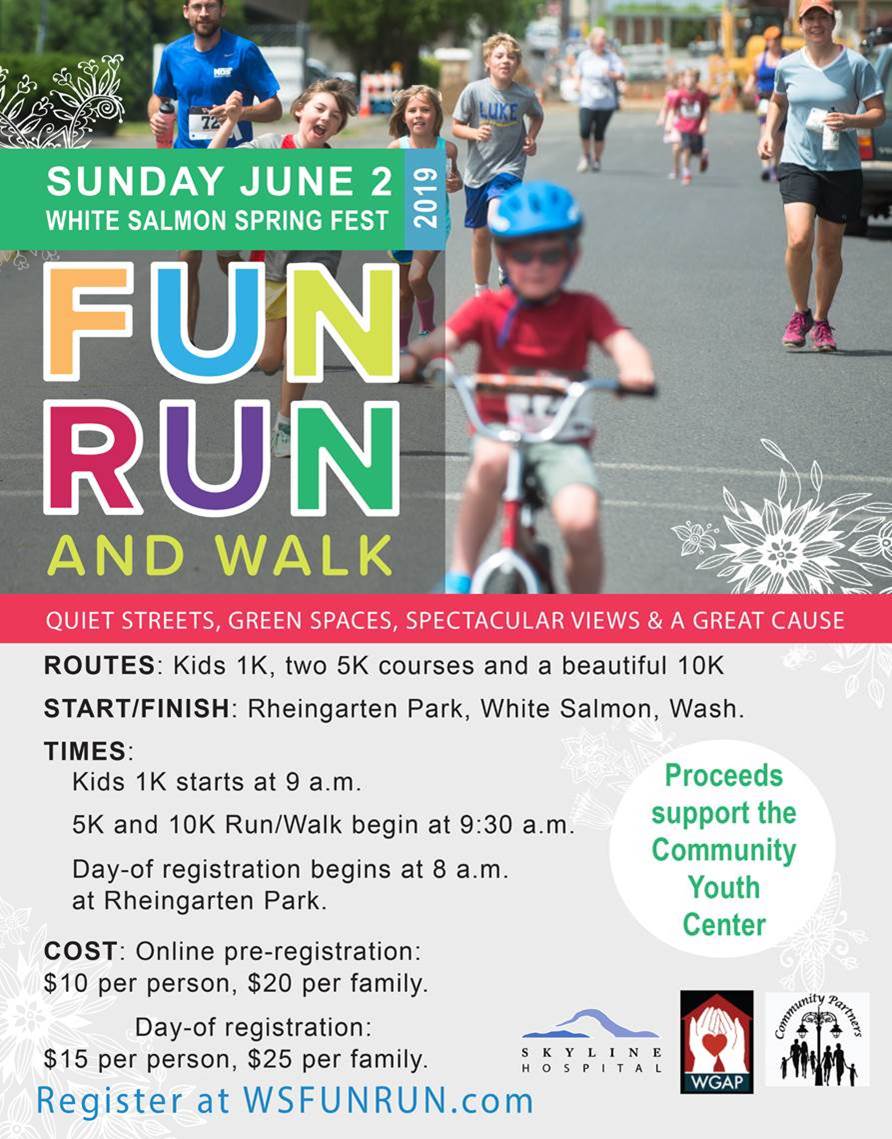 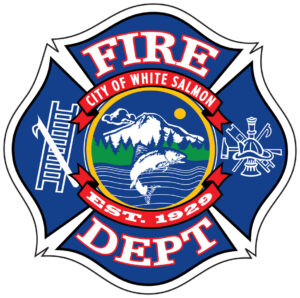 Rise and shine early on Saturday, then get ready for a big day of fun and entertainment with the Firemen’s Breakfast from 7:00 am-10:00 am at the White Salmon Fire Station

Bootleg Barney and the Strays